The room known as the East Auditorium, where chairs are normally lined up in rows, had been transformed to a large conference room with skirted round tables filling the space. Round. Everything round. Even the centerpieces were round containers with ping-pong balls. The message: circles are better than rows. It was time to re:group and get people thinking in circles.

I wasn’t even “supposed” to be at the conference. I wasn’t on the guest or attendee list, but something moved me bigger than a lack of an invitation. People I wanted to see were in town from across the globe, and I was determined to find them. If it only meant a hug during a 15-minute break in their busy conference schedule, that would be fine. My family had met them last summer on a mission trip to Moldova. Honestly, when we waved goodbye last July, I never thought I’d see them again. Now they were in my town, at my church. Nothing was going to stop me from seeing them. Nothing.

Somehow among all the attendees, it only took a few minutes to find them, and I squeezed each one practically in half. Smiles. Laughter. Hugs. They looked great.

“You look different!” they said to me.

“I hope so. When you saw me I was on a mission trip,” I replied. 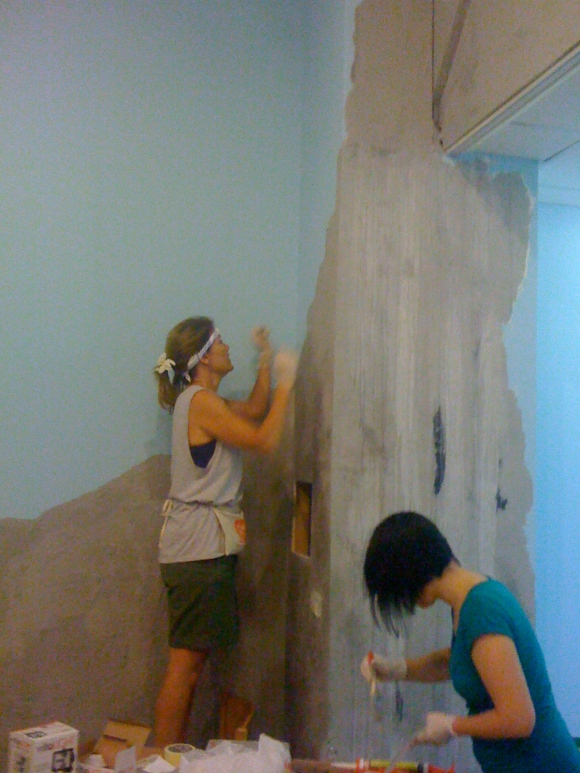 But it was time for the main session to start, and they needed to get to their seats. Instead of saying goodbye so soon, I walked with them inside and may have used a Russian accent as the greeter welcomed us. Whatever worked. Nice to know I could blend so easily.

They asked me to stay. The table had an available seat, and my calendar was clear for the rest of the afternoon, so I dug in my heels. The session began in typical North Point style (which means amazing beyond description), and I stood there at a ten-top table near the stage singing beside people for whom English is not their first language. Romanian and Russian flow from their lips without pause. The English words on the screen or barreling out of the speakers’ or singers’ lips at lightning speed might have required more concentration from them. Some of the jokes may have gone over their heads, simply due to cultural differences, but the message was clear. We were experiencing something amazing together.

During the songs I was overwhelmed when I thought of what brought us together. In a grand room full of Americans, I felt closest to the visitors from Moldova. After the worship, I reached over to pat one of the gals on the knee, the way a mom would express love to a child. “I hurd your voice.You sing gud,” she told me in her thick accent. Regardless of the lyrics, the message carried.

As providence would have it, their night was free, but their boss, Andre, had a meeting he needed to attend. I offered to take them wherever they wanted to go, and after a discussion in rapid-fire Russian, they took me up on it. So at 4 o’clock we set off to their chosen destination: a dollar store, WalMart, and Kohl’s. 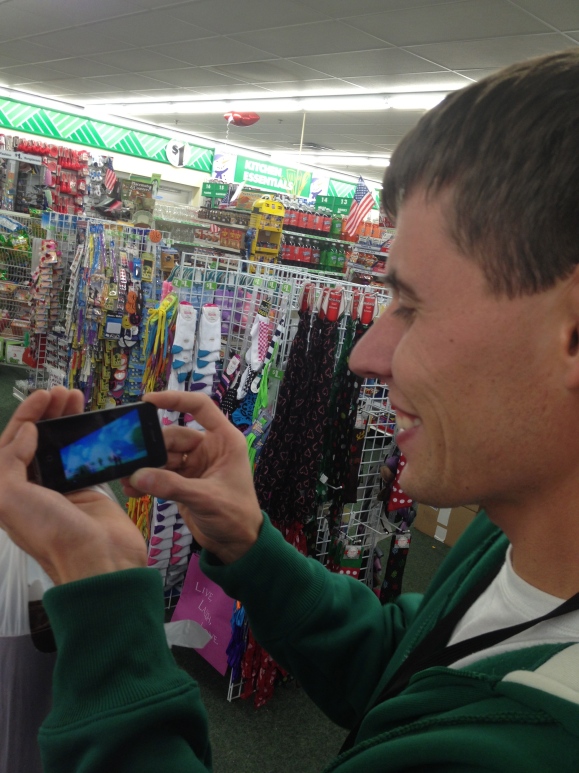 Their lead pastor had the only working phone in America, so we stayed in contact. I never wanted him to wonder where they were.

I couldn’t believe that I had these visitors with me. Part of me felt so guilty, knowing that the other members of our mission team would love to be with us, and I was hogging them all to myself. But it wasn’t planned; the whole afternoon and evening had been impromptu. As I waited for them at the different stores, I thought of how gracious they had been to us making sure our every need was met when we were in their land. It was my chance to do something similar.

“Are you hungry?” I asked. A resounding YES had me texting Andre to tell him to meet us at the Cheesecake Factory. He responded that it would be too expensive. They would find some fast food, perhaps a KFC. Again, I flashed back to our trip to their country, where they gave us the best they could.

I texted back to Andre. “Absolutely not. Go to the Cheesecake Factory at North Point Mall. I will not let you come to America and eat KFC on your last night here. Don’t worry about it.” At that moment I felt like Santa Claus.

When we parked and walked into the restaurant, the group oohed and aahed at the decor. We had a large round table in the semi-private round room (again with the circles), which afforded a couple more people from the church ample room to come in and visit with them there. They ate and ate well. They were so appreciative of everything and absolutely loved the cheesecake. 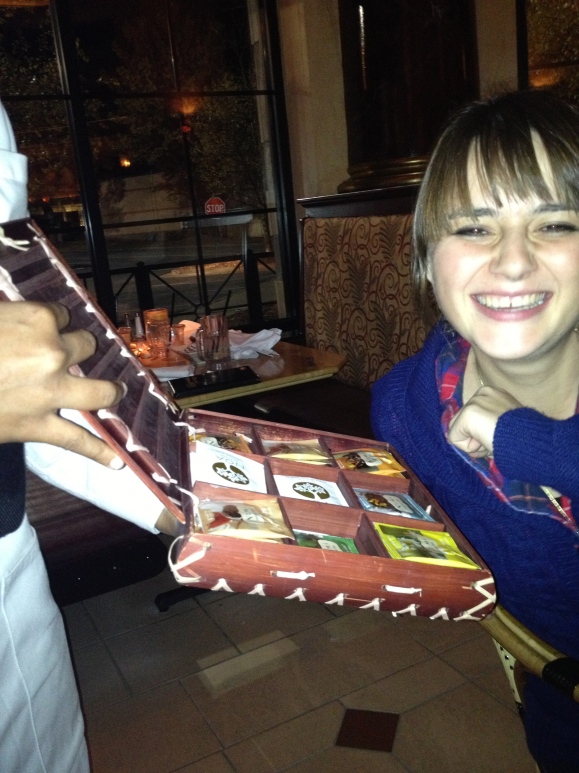 After dinner, Sergui asked me to come outside with him. He had a gift for me, a handmade vase from Moldova. I was touched. He and Andre left for an appointment, and I drove the other five to two different host homes where they were staying.

When I got to my home, my husband and son were already asleep. The dogfood hadn’t been purchased, the package wasn’t shipped, the homework wasn’t graded. My TO DO list remained unchecked. All of that could be done the next day, when these dear ones would be packing up and heading to the airport. But I had an afternoon full of great memories by taking a chance and acting on an urge. It’s all about relationships. Doing life in circles. Furthermore on UpStreet this month, we’re talking about service: seeing a need and doing something about it. I loved living out God’s Big Idea. I still can’t believe I got to see them all again. Circles make the world go round. Bottom line: I love my church.

One of the best laughs I’ve had all year was back in February. I was trying my hand at making homemade kefir. What’s that? It’s a high protein drink that is kind of like buttermilk meets yogurt. I followed the directions and added the live cultures to the milk and had to let it sit out at room temperature for 24 hours.

So that my family wouldn’t think I’d forgotten to put it in the refrigerator and left it on the counter by mistake (and partly to remind me), I stuck this note to the jar: 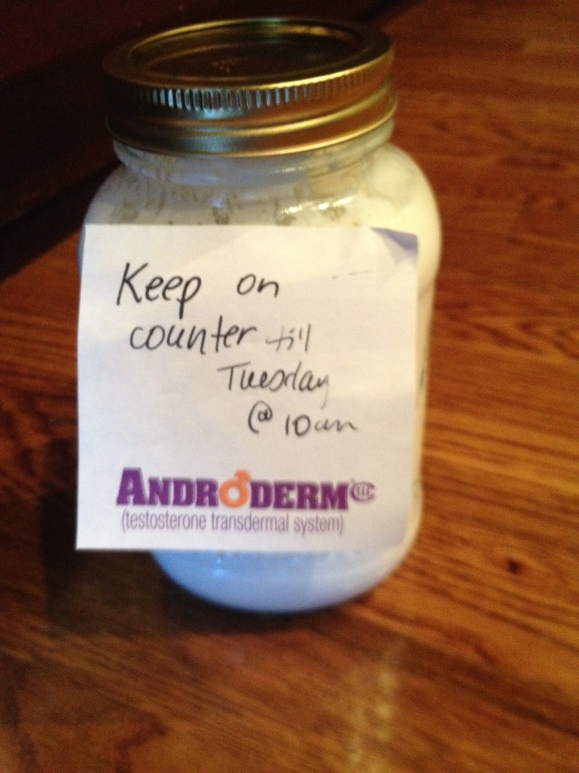 When I got home later Tuesday afternoon, the jar was no longer on the counter.

It was on the floor.

Outside the window this Wednesday morning, immediately after the disastrous election results, the sky appears appropriately dark and gloomy, punctuating the tenor inside. My husband and I don’t speak but say everything we need to with a glance. He had retired to bed before I did, leaving me downstairs with the radio broadcasting results and my Twitter feed vomiting out nuggets of hope for votes still uncounted. At that point in the process it was still just a news source projecting the outcome. He later thanked me for not telling him what I already knew when I slipped into bed beside him. Had he known, his fitful sleep would have been even more fitful.

For almost 9 o’clock this room where I’m sitting is unusually dark. I’m propped up in the corner with my laptop, and occasional notification that someone on Twitter beckons my attention. I can choose whether to respond. That may be the only control I have over anything today.

Now for anyone likening this emotion to one you feel if your favorite SEC football team loses a big rivalry or your pick on the Bachelor didn’t get the rose, hear me when I say, it goes way deeper than that. I’ve followed this presidential race since the beginning. I’m one of those who knew who I wanted for President long before any candidate was named.

I’ll never forget Thanksgiving in 2010 when one politically savvy gentleman asked me who I like for the ’12 election, and without hesitation and to his surprise, I said, “Newt Gingrich. He is the smartest man I know. With his handle on history, he is the one who could lead America back on track.”

When Newt finally announced he would run, I was ecstatic. I attended two of his events during the campaign. I watched and participated by tweeting during every single GOP debate in fall of 2011, garnering a Twitter family of followers who had a common interest, an America where individuals take responsibility for themselves. But Newt was deemed unelectable from the start by the media, and the population bought into that— even though every time he spoke, the other candidates listened, really listened, to what he said.

No, I’m not talking a game here. Nor am I talking about some obscure future, but instead our present and how every step we take must be intentional and towards a chosen direction. We must know where we’re going—on purpose—and not simply follow a crowd.

Have you ever arrived somewhere with a large crowd and gotten in a long line of people waiting and then finally realize they were never in line at all? They were just standing there idly, and you’d wasted all that time? Or have you been driving and followed the row of cars in front of you going in the same direction assuming they were going to the same destination as you, only to realize it when they park nowhere near where you wanted to be?

We are surrounded by people setting the course of our nation’s future based on sound bites, body parts, and free stuff. We have a system in place that greatly affects all of us, though the majority of the people don’t realize that. They do what they’re told, pay what they’re told, maybe grumble a little along the way, but only appear when it’s time to go cast their vote every four years. Why bother with those mid-term elections? They’re busy that day. Or, more accurately, they don’t see how it affects them. They’re not “into politics.”

In the end, they hear the tidbits and soundbites they want, choose the candidate they like based on his cool factor, and even though they checked in for the first time last week after Dancing With the Stars was over, their vote counts equally with ours who have paid attention, watched, contributed, participated, studied, and informed ourselves all along the way. Our decisions were based on what would best work economically for our nation, not on social issues. I want limited government and lots of freedom.

I believe it was the low-information voters who determined this election.

I can’t help but be reminded of a scene from Schindler’s list when the Jews were lined up and determined whether they were an essential worker or not. The outcome determined which line they were directed towards, and ultimately how soon their trip to Auschwitz would be. That may be an exaggerated example, but the message is the same—You’re a producer, or you’re a moocher. Take your number. Give some of yours to him. Next. People lined up in a line they don’t want to be in, but being forced by those making decisions for them.

This is not how our America is supposed to be. Remember when we used to hear work hard, and the hard work will pay off? Now it seems to be work hard, and your hard work will pay him. See, traditional values failed. Though Erick Erickson of WSB radio and RedState.com tells us we’re just keeping the status quo, and if that’s the case, we know how to deal with that. He has a valid point. I just hope that the direction of the presidency won’t lead us so far off track in the next four years that a course correction will be next to impossible. I don’t want to get to Auschwitz that fast.