It was spring, April 2004 to be exact. We didn’t have willing family members around begging to keep our sons for the weekends, so time alone was as rare as the Hope diamond. But like a rare jewel, a real treasure materialized in our lives. It was our older son’s UpStreet small group leader from church.

Braeden was in third grade; Eric was a college student. Eric hung the moon.

Sundays on UpStreet were a great time. Never once did we hear, “Do I HAVE to go to church?” An occasional phone call during the week from Eric just to say “hi” and see how Braeden was doing was enough to light up this boy and make him feel ten feet tall.

One of the first times I met Eric, he came to watch his little buddy play baseball. I remember him and his fiancée covered in blankets and using hand warmers to endure the brutal cold of the early season. He didn’t have to be there, but he was.

When the chance arose for Eric to come hangout for the weekend with both of our boys, we didn’t hesitate. Off we went to Biltmore Estates to celebrate our 19th wedding anniversary. 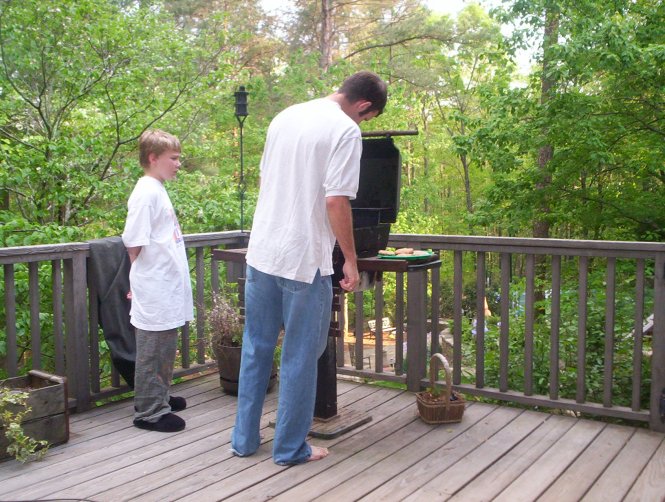 They grilled out one night.

They played a round of golf at the Atlanta Athletic Club with Eric’s father and ate out at the Midway Meal House, a local favorite for southern fare.

This college kid was so responsible, devoted, and caring. I’m not sure who had more fun on the weekend—us in the mountains or our sons with Eric.

Not long afterwards, Eric married his fiancée, and they moved to Texas. The move left a big hole in my son’s heart. His small group relationships and involvement for the next several years truly never were the same. By the time high school rolled around, Braeden had found a comfortable spot serving in Waumba Land as a traveling guitarist.

Through the years we talked about Eric and what an awesome leader he had been. We wondered where he was, how married life was for him, and wished he had never left. That void remained.

Fast forward to spring 2012. On one college application, my son was required to write an essay of his testimony. It came as no surprise that he mentioned his long-ago small group leader.

I developed a strong relationship with my small group leader, Eric K. I was very comfortable with Eric, and I felt that I could talk about anything with him.

Braeden’s high school graduation approached. Eric came to mind. I wanted to find him to let him know that his little buddy had reached a milestone and send him an announcement. The phone numbers I had for him were no longer in service. I searched around awhile and found out that he had moved back to the general area and was attending one of our campus churches. Hooray! Eric and his wife now have a one-year old baby girl.

He and Braeden connected on FaceBook and exchanged emails, and when this recent graduate’s busy summer schedule slowed down for a minute, they made a plan to meet for dinner. That dinner was last night.

It’s apparent Eric is still just as responsible, devoted, and caring as he ever was. Because this young man took the time to invest in my son’s life years ago and let him know, even an eight-year-old kid was important, my son has great memories of UpStreet and a great foundation. Though Braeden could spout off names of his favorite pro baseball players with all their stats, it is Eric who is the real-life role model. Soon as my son goes off to college, maybe in some way, the cycle will continue.  Thank you, UpStreet. I’m forever grateful.

I’m sipping hot tea in my hefty, new Covenant College mug purchased a couple days ago at pre-orientation for the upcoming freshmen class, of which my first-born son will be a part. I’ve had this quirk for years about selecting just the right coffee cup to define my day or the perfect stemmed glass to suit my mood or beverage I’m enjoying. My mantra remains, “It’s all about the glass.”

While visiting the college tuck shop, I wanted to buy something with the institution’s name on it. Okay, honestly, part of me wanted to buy one of everything so I could be decked out in Covenant Scot blue and plaid, a walking billboard demonstrating my time as a college mom had arrived, but I refrained. The strong, dark blue mug with the bold white letters and emblem caught my eye. That would be my lone purchase for this trip.

As silly as it may sound I was excited to use my new mug this morning and unloaded the dishwasher without hesitation so I could see my new prize. I selected a blend of tea to brew: orange spice, Irish breakfast, and green. Topped off with a dash of vanilla soy milk, the warm, delicious flavors pleased my tastebuds.

The mug is larger than those I usually use, and it’s curved at the base. Its inside coating is white ceramic—new, clean, pure. Over time the inside will likely become stained like many of my other cups, showing its years of use, perhaps fine lines or cracks, each a memory of days gone by.

But for now I enjoy this brand new cup and hold it in both hands. Sitting outside on the front porch on an early Sunday morning in mid-June when the temperatures are unusually low and a slight breeze wakes the full green leaves of the cherry tree in my front yard into a slow, graceful dance, I take another sip from my new big mug. I think about what it represents, why I even have it. This mug will be a reminder of my son while he is away at college, our first child to leave home. This cup isn’t just a cup of tea. It’s a cup of hope.

In the days to come when I select it to hold my morning brew and hold it in both hands, it will be a reminder of that hope within. It will be a reminder to praise my Lord in thanksgiving for the gift of our son, the years we’ve had with him in our home, and to lift up a prayer for him and all of Covenant College. A prayer that he is leaning in to God’s will for his life and will rest in the two strong hands of our Heavenly Father. With every sip, another prayer. Hope. I look inside and see the bottom, which in a way means I’m full of hope.

And now, if you’ll excuse me, it’s time for a refill.