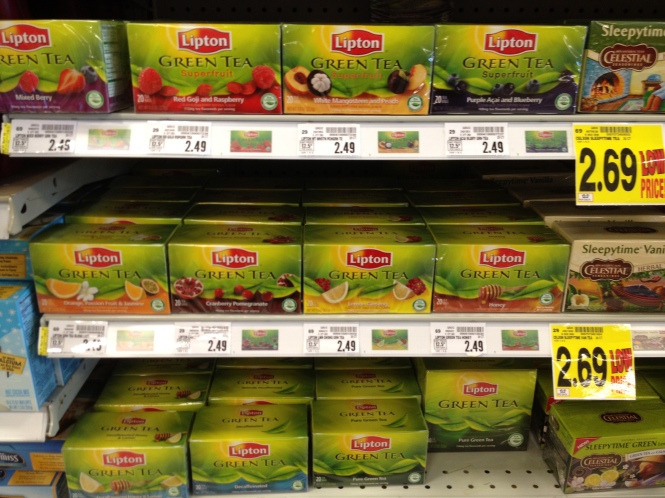 I got so excited while shopping at Kroger today simply by seeing the variety of green tea on the shelf. I hadn’t bought any in a while due to a pretty good selection in my pantry. But having used more than usual last week, I’d made a mental note to pick up some today. Was I ever surprised! And this was just the Lipton brand. Several other brands lined up box after box touting this fruit or that, dressed in bright colors. I had to constrain myself from grabbing one of each. I’ll work my way through the selections a week at a time.

Last week in our Healthy Living Bible study, we learned about green tea, and though I’ve had an occasional cup from time to time, I had no idea all the benefits green tea afforded me. For instance, according to Annette Reeder in Treasures of Healthy Living, the powerful antioxidants in green tea will actually kill cancer cells without harming healthy tissue. Did you hear that? Green tea will kill cancer cells. I’m in.

What is the antioxidant? Let’s call it EGCG because the real name is too long to remember for my busy brain. I’m just trusting the experts who did the research on this one. Besides the cancer-fighting benefits, green tea may be helpful in dealing with:

When I told my husband what I’d learned, he made a change. Instead of getting the coffee pot ready for the next morning’s brew, he declared the next day he’d try green tea instead. So did I. In the last week, we’ve only had coffee twice, replacing it with green tea the other mornings. Guess what? We didn’t implode. We didn’t explode. In fact, we might just have better attitudes knowing that we were doing something good for our cells and ourselves.

Don’t get me wrong; we’re not giving up coffee altogether, but we have cut way back and are replacing it with a hot beverage that might just make our hearts healthier. What’s not to like about that? How about you? Are you willing to replace one not-so-good-for-you habit with something better? Just one is one step closer to healthy living.

It’s been a week filled with fiber, even more than usual as our Treasures of Healthy Living study focused on whole grains. One night’s meal was simply cornbread, pinto beans and a side of buckwheat. It’s the first time I’d ever cooked buckwheat but liked it so much it had an encore performance the next morning as buckwheat pancakes.

Last night while I was busy baking two apple pies for one of my husband’s colleagues by request, I somehow coerced my 15-year-old son to make dinner. It started with a simple, “Can you give me a hand over here for a minute?” to “Congratulations, you’re now set to be a bachelor. You have just made an entire spaghetti and meat-sauce dinner.” Go figure. He got rave reviews from his father and big brother when they got home from baseball practice. I took no credit. It all belonged to the teenaged chef.

We had gotten down to the last heel of bread, so I knew it meant time to whip out the buckets of grain. Coincidentally, it was the same day last month when the exterminator came for his monthly visit after I was pulling freshly baked loaves of honey-wheat bread out of the oven. The house smelled delicious causing the bugman’s eyes to bug out when he entered. After he completed his work and brought me papers to sign, I offered him a slice of bread (I couldn’t help but notice his salivating.), and he accepted. He pulled out a stool from under the counter and sat down. I offered him a cup of coffee. He accepted. No sugar, just cream, thanks. Sure, he’d take a second slice of bread. Christmas tunes played on the radio in the background, and the rooms tastefully decorated added to the feeling I’d hopped out of a scene from the old TV show Hazel where she would feed her milkman when he delivered bottles. The bugman was so appreciative of the mid-day snack, and I was happy to know I could serve him something nourishing.

This week I added a bit of an Ezekiel touch to baking day. I milled in two tablespoons each of black beans, lentils, and kidney beans which not only added protein to the bread but pretty speckled colors too. With the batch of dough, I formed it into three loaves of bread, four large buns, eight dinner rolls, and one cinnamon-raisin loaf for this morning’s breakfast. To save a loaf for morning, put your dough in a pan, cover it, and put in the refrigerator until early the next morning. Take it out early to let it come back to room temperature or put it in a warming drawer or low-set oven to “bread proof” setting so it can rise. About an hour later, my husband tossed it in the oven and had warm cinnamon bread for breakfast.

Now, it’s off to the fabric store to purchase material to re-cover dining room chairs. A quick-fix for big impact, because, after all, I play house.

I’ve denied it long enough, but I can’t ignore it any longer—that little voice telling me I’m supposed to blog about this great new adventure I’m leading with my ladies’ small group (the Circle Sistas) from North Point Community Church. Last week I announced in an email that I was prayerfully considering writing about it, and my responses back indicated the little voice might be on to something. My pal, Jeff Henderson, pastor of Gwinnett Church, refers to it as becoming aware of God’s thumbprint on your life. He advises us not to ignore the nudge but to lean into it. “Okay, I hear you, Lord.” And to quote one of our theme songs from last year’s Moldovan mission trip, “Whaddaya want from me?”

So here it is: Dtells Dtales is taking on a healthy living angle for now. Details follow.

Getting ten women to agree on something is comparable to passing a bill in Congress. Some support it; some oppose it; indifferent ones vote “present,” while some don’t show up. Luckily for the Circle Sistas, it wasn’t quite that involved, but due to running unopposed, my suggestion passed for what would be our first study of the year.

Time couldn’t be more appropriate, with the start of a new year when so many people jump on the fitness bandwagon. Our study is quite a bit more involved than new year’s resolutions or a diet, it’s a brand new study, published in 2011, called Treasures of Healthy Living by Annette Reeder and Dr. Richard Couey. 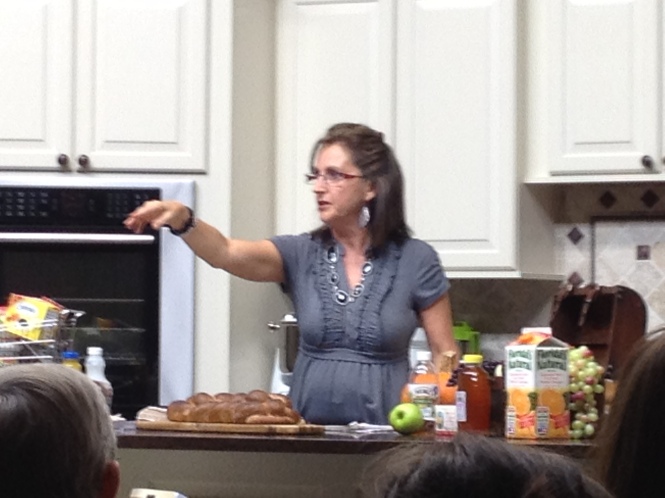 One my Circle Sistas, Karen, and I met the author a couple months earlier when Annette visited from Virginia to teach an intro class at the Bread Beckers in Woodstock, Georgia. Pictured is Sue Becker, an expert in the field of healthy lifestyles. I’d been a pretty healthy eater and cook for a couple decades now, and Karen had lived through her share of dealing with food allergies in her family. We both agreed we could learn more and incorporate any new-found knowledge in our repertoire, so after the class our interest was piqued. Karen bought the study book, cookbook, and nutrition manual. I settled on the nutrition manual and came home to read it with highlighter in hand.

Once the group decided we’d go with this study, Karen ordered nine books from Amazon but found out they were being shipped from warehouses across the country. None had nine in stock.

The group was scheduled to meet at my house for the initial lesson, but the night before not a single book had arrived. Not quite sure how I was going to pull off the lesson empty-handed, I’ve been known to wing it before, so I braced for whatever was to come.

Ten o’clock chimed, and so did the doorbell. I looked out and saw two of the ladies arriving, and right behind them was the UPS truck. Brown sure was surprised when I told him he was delivering the Lord’s work that day. The delivery man smiled and walked a bit prouder back to his truck.

Our group has grown accustomed to noshing on breakfast goodies for a half hour before we begin anything, so breaking that habit was our first challenge. Armed with a whip and a chair, I corralled the gals into one room to begin the formal lesson. I had a handout for them to complete which got them digging into their Bibles to find verses. One commented she was embarrassed not to know the order of the books of the Bible, (Don’t we love those little tabs?), but that is the best part—this study isn’t just about our diet—it’s getting us into God’s word to find the treasure He already laid out for us.

Each week’s lesson has suggestions of foods for the participants to try. I’d made carrot cookies and loaded oatmeal chocolate cherry cookies, and Karen brought a Calypso fruit salad. While some of the ladies were eager and ready to have me lead them around a grocery store, others were skeptical and resistant. I challenged them to keep an open mind about the study—this isn’t a diet we are doing—to see how their opinions may change as we dig further into it. We are learning together as we go.

More about that later as I tell you about how my friends are learning about beverages, freshly milled grains, and healthier choices for meal times. We’ll check in from time to time to see what’s cooking. Come on and follow us on our treasure hunt. What changes have you made for 2012 so far? I’d love to hear your positive comments and any questions you might have.